Former New England Patriots running back Mosi Tatupu, who died of a heart attack in 2010 at age 54, suffered from chronic traumatic encephalopathy (CTE), a disease that has been linked to football-related head trauma.

By the end of Mosi Tatupu’s 13 seasons with the Patriots, he was beginning to exhibit signs consistent with the debilitating effects of CTE. 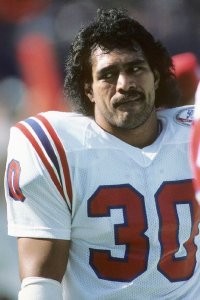 Tatupu’s former wife, Linnea Garcia-Tatupu, told the Boston Globe that when she found out last year about the existence of some of Tatupu’s brain tissue from his autopsy, she donated a preserved sample to Boston University’s CTE Center, where researchers are studying the disease and have discovered evidence of it in the brains of about 140 former athletes, including many football players.

Testing on Tatupu’s brain tissue revealed the presence of an abnormal buildup of a protein, tau, in a manner that is unique to CTE.

After Tatupu’s death in 2010, former teammates remembered him as a player who always seemed to be smiling, who had a special connection with fans (who created a cheering section called “Mosi’s Mooses”), and who was a unifying presence in the locker room.

But according to Garcia-Tatupu, her ex-husband’s genial disposition began to change toward the end of his 13-year tenure with the Patriots. He became “aloof and forgetful” and developed a heavy drinking problem, according to the Globe report. His behavioral changes ultimately led to a divorce after 20 years of marriage.

The couple’s son, Lofa Tatupu, played linebacker for the Seattle Seahawks from 2005 to 2010.

Mosi Tatupu’s behavioral decline began in his 30s, which is earlier than the timeframe researchers typically associate with CTE’s impact. Former NFL players who have been linked to the disease often don’t exhibit symptoms until years later after retirement.

Dr. Jesse Mez, a researcher at BU’s CTE Center, conducts interviews with friends and family of deceased players in order to confirm the diagnosis of CTE. Mez told the Globe that “it’s striking how different [Tatupu] became.”

Tatupu, born in American Samoa and raised primarily in Hawaii, was elected to the Polynesian Football Hall of Fame in October. His family learned the next day that the tests on his brain tissue sample revealed evidence of CTE.

Garcia-Tatupu wants to raise awareness about the long-term danger in playing football.

“I am not going to recommend any sport where you can’t protect the very thing that is meant to keep you alive,” she told the Globe. “If your brain doesn’t work, there is precious little else that will.”