Going through the Stages of CTE

One of the challenging aspects of Chronic Traumatic Encephalopathy (CTE) is that its onset can happen years after injury.  It is not as simple as hitting your head yesterday and getting CTE today.  It comes on its own time or may not come at all.  So when it presents itself, its symptoms can be mistaken for a myriad of other diagnoses.  After all, it is not uncommon for people to suffer from headaches or depression. Think of how many people you know who get migraines or are on anti-depressants.  Or after our veterans come home from tour, some may be diagnosed with Post Traumatic Stress Disorder with symptoms that are also seen in CTE. 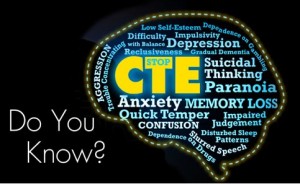 Scientists currently say they can’t confirm 100% that someone has CTE until post-mortem, but thanks to an impressive collaboration between research institutions just a few years back, we have a new tool in the arsenal.  In the collective study, researchers concluded that most patients progress through four distinct behavioral stages, and that some concurrently experience another degenerative disease.  There are of course variances as CTE manifests differently in individuals.  Here are some of the most common symptoms experienced in the four progressive stages of CTE: – See more at:

This first stage is most commonly marked by headaches, and loss of attention and concentration.  Some individuals experience short-term memory problems, depression, aggressive tendencies, explosivity, and executive function issues.

This final stage is marked by severe cognition problems and memory loss, with many having progressed to full-blown dementia.  Symptoms in this stage include profound loss of attention and concentration, paranoia, depression, gait and visuospatial difficulties, executive dysfunction, language difficulties, explosivity and aggression.  Parkinsonism also affects physical movement for some.

Have you observed any of these stages in individuals you suspect have CTE?